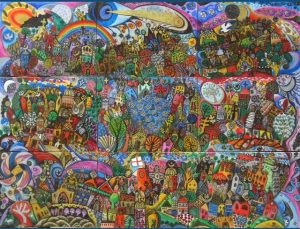 Over the past two decades, Brian Whelan has created countless paintings of holy cities, which he describes as “thin places where heaven and Earth seem so close as to actually touch.”

Whelan, who lives in the western Loudoun County village of Waterford, is particularly fascinated by the idea of cities where shrines, temples, cathedrals and mosques attract pilgrims of the three Abrahamic faiths — Judaism, Christianity and Islam — coexisting in peace and harmony.

Nine of Whelan’s paintings are on display in “Holy City,” an exhibition running through January at the Washington National Cathedral. The works are arranged in rows of three, forming a 9-by-12-foot mural in which the scenes blend seamlessly. Having exhibited his works at the cathedral previously, he approached officials about displaying his paintings of holy cities, which he had completed over two years.