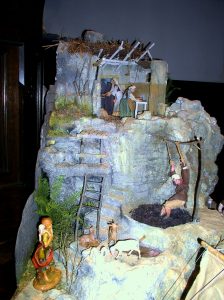 Except for a lone cow, the stable stands empty in the Nativity scene at Grace Episcopal Church in the Fauquier County town of The Plains.

The creche is unlike those commonly seen in churches and front yards beginning the month before Christmas, typically featuring figures of Mary, Joseph and the baby Jesus in the stable, often joined by shepherds, angels, wise men and animals.

Instead, the scene is an imaginative, highly detailed, miniature representation of life in the city of Bethlehem. Townspeople are seen going about their daily business of baking bread, weaving fabric and even taking a nap. As the holiday approaches, more figures will be added to the scene to illustrate the Christmas story.

“Fill in the Blank”

“The Ballad of the Costa Concordia”

“This is an instant indie-rock classic.”

“…one of the most critically acclaimed indie albums of the decade.”

“As a wordsmith and ideas man, Toledo is up there with a clutch of maverick geniuses…”

“The Will Toledo-led band covers a lot of different tracks during their sets, and at their homecoming gig at The Neptune last month, they covered the Talking Heads’ Speaking In Tongues track ‘This Must Be the Place (Naive Melody)’ with the help of their opening band.

“…there really is something jubilant about how Will Toledo takes that Pavement style of indie slop to such anthemic levels here.”

“Teens is a voice-cracking classic.”

“Through changes of pace and intelligent, introspective lyrics, Car Seat Headrest have created a work of raw depth and beauty.”

“The song simultaneously inspires feelings of dread and hope.”

“Car Seat Headrest’s ‘Drunk Drivers /Killer Whales’ is an alt rock masterpiece and the linchpin of Teens of Denial, one of the year’s best albums.”

“These songs rock with a fuzzy-yet-clear intensity; they retain their DIY spirit, but the focus is sharper, as are the hooks, even when songs stretch past the seven-minute mark.”

“Teens of Denial takes the verbosity of artists like Jonathan Richman and Okkervil River’s Will Sheff and combines it with a classic rock-sized sound to create one of the most enthralling records of 2016.”

“Teens of Denial is a complex, smart, catchy record with some of the year’s best tracks on it.”

“Utilizing the classic quiet-loud-quiet structure, ‘Cosmic Hero’ plays with emotions more than it has any right to.”

“While the entirety of Teens Of Denial could be seen as a magnificent journey through an adolescents growing fears, ‘The Ballad Of The Costa Concordia’ organically put it in one paranoid package.”

“…my favourite album and one to buy all your favourite people this Christmas is ‘Teens of Denial’ by my current favourite band Car Seat Headrest.”

“As Teens of Denial presents Car Seat Headrest (aka Will Toledo) in a full-band setting following a string of Bandcamp albums, it’s hardly the sound of bending to convention.”

“…Toledo applies his encyclopedic rock knowledge to writing indelible, engaging songs that manage to sound so big and yet feel so personal.”

“This first studio-recorded LP from the band, Teens of Denial is frustration, confusion and humor in one of its best rock interpretations.”

“When that crunching and cathartic ‘it doesn’t have to be like this’ refrain finally kicks in, it’s nearly as bracing as any face-slapping Nirvana chorus.”

“This is 23-year-old Will Toledo’s 13th album, a tale of 20-something lives and 90s influenced American indie rock par excellence.”

“Every generation gets the bookish, depressive indie-rock superstar it deserves, and you could scribble out the margins of every notebook inside a Staples with all the soul-scraping lines packed into Car Seat Headrest’s Teens of Denial.”

“A feel-good album about people chemically incapable of feeling good, Teens of Denial reckons mental illness, alienation, and a blooper reel’s worth of false epiphanies without angst or coddling…”

“Teens Of Denial is that record I never got tired of.”

“Teens Of Denial is a massive statement, proof that the scruffiness of those old songs was more necessity than style.”

“…to paraphrase one of Toledo’s ancestors, a perfect sound is a perfect sound forever, and Denial found him honing it into his most cohesive, most endlessly replayable set yet.”

“As a songwriter, Toledo captures what it’s like to be an awkward but thoughtful and intelligent man in his twenties in the modern era.”

“…with Teens of Denial, Will Toledo has crafted a lofty, lyrically observant, melodic heavy and fun-as-hell album that does its predecessors well.”

“The chorus of the song…hits at the feeling of being an anxious millennial directly.”

“Whether he’s lamenting his lost backpack or pondering that next glass of beer, Toledo makes the mundane sound brainy and cool.”

“His music is moving and even deeply affecting at times.”

“Thank you, Car Seat Headrest, for delivering the best indie-rock album in years.”

“Teens of Denial collects a still more impressive dozen artful packed-with-ideas songs that never trip over their own ambition.”

“They’re basically everything you ever wanted in a band, and will hit that spot for a music craving pretty much every time you have one.”

“‘Vincent’ starts with 2½ minutes of gathering guitar Minimalism, adding a motor beat; then Will Toledo’s voice arrives, with bipolar confessions of self-doubt and excess, as the music just keeps building.”

“Toledo is one of those rare talents whose precision as a songwriter is matched by his gift for arrangement.”

“The record is a near-masterpiece, big and ambitious but still precise in every moment…and if he’s going to be the voice, or even a voice, of indie rock moving forward, I feel like we’re in good hands.”

“The complexity of the songwriting on Teens of Denial isn’t just a craftsman showing off; it’s the work of someone building something elaborate enough to hide inside.”

“One of the best rising acts in rock.”

“…someone who can express the torments and depressions of a generation with a twisted sense of humor and music that shambles as recklessly as life itself.”

“I admire a lot of music, but this is what I want from music.”

“If this doesn’t make you wanna crank the car stereo and go all Cannonball Run, you need new ears.”

“‘Drunk Drivers / Killer Whales’ says something about every year, every day, and every waking moment in our life, and that’s such a hard thing to do as a writer.”

“…it simply and positively rocks.”

“Car Seat’s entire set was pristine, and the band has clearly grown into their skin as live performers.”

“My good friend and roommate Julia always insists that the success of a first date can be determined by turning on the song ‘Drunk Drivers/Killer Whales’ in the car and seeing if they’re singing along by the end.”

“Toledo may posture as an underachiever, but with Teens Of Denial, he’s achieved something great, transcending his Bandcamp origins to create a work that rivals its lofty influences.”

“Toledo’s open-book approach to personal struggles provides a scarred but triumphant human heart at the center of these 11 blazing epics, all of which find a radio friendly angle in the uncertainties of youth.”

Over the past two decades, Brian Whelan has created countless paintings of holy cities, which he describes as “thin places where heaven and Earth seem so close as to actually touch.”

Whelan, who lives in the western Loudoun County village of Waterford, is particularly fascinated by the idea of cities where shrines, temples, cathedrals and mosques attract pilgrims of the three Abrahamic faiths — Judaism, Christianity and Islam — coexisting in peace and harmony.

Nine of Whelan’s paintings are on display in “Holy City,” an exhibition running through January at the Washington National Cathedral. The works are arranged in rows of three, forming a 9-by-12-foot mural in which the scenes blend seamlessly. Having exhibited his works at the cathedral previously, he approached officials about displaying his paintings of holy cities, which he had completed over two years.