The heavy hauls along Route 15 have ended.

While most of us were sleeping, hundreds of tons of heavy machinery have been rumbling slowly through Prince William and Loudoun counties and across the southern edge of Leesburg. The hauls — 36 in all over the past five months — have been delivering bulky components for the Panda Stonewall power plant that is being constructed off Sycolin Road at Goose Creek.

Photos below taken at Gilberts Corner,
courtesy of Brad Brown 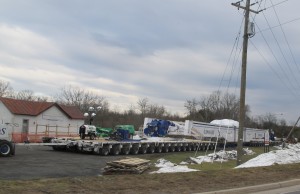 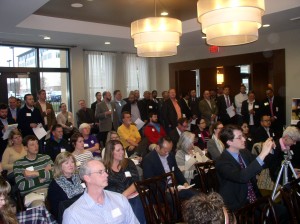 They want more: more bars and restaurants, and more ways to get to them safely. More music and entertainment destinations. More housing options in urban, walkable environments.

Loudoun County residents who attended a public input session in Ashburn on Monday confirmed the preliminary recommendations of an ad hoc committee created by the Loudoun Economic Development Advisory Commission. That committee has been looking at ways of stimulating the nighttime economy to make Loudoun more attractive to businesses and the young workers they employ.

They arrive early, sometimes as much as an hour before the first note is played.

Residents of Morningside House, a Leesburg assisted-living facility, come to the dining room and position their wheelchairs or claim seats in rows of chairs — just as they have nearly every Tuesday evening for 19 years. The folding doors at the front of the room are opened to reveal the activity room, which has been transformed into a stage. One by one, the musicians take their places.

Promptly at 7 p.m., guitarist Bob Brown opens the show with a joke and then introduces the first song, and the musicians launch into an up-tempo rendition of a classic Lefty Frizzell song. The longest-running weekly jam session in Loudoun County is underway. 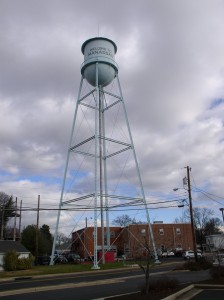 Supporters of the 101-year-old Manassas water tower won a major victory last month when the city council unanimously rejected an appeal that would have led to its demolition.

Instead, the council voted Feb. 22 to uphold the Manassas Architectural Review Board’s ruling protecting the water tower. The council also authorized Mayor Harry J. “Hal” Parish II (R) to send a letter to state and federal agencies supporting a local preservation group’s efforts to have the structure listed on the National Register of Historic Places.

A dozen students had crowded into a small conference room at Loudoun County High School in Leesburg last month to learn about Advanced Placement classes.

Unlike similar sessions — typically led by teachers or counselors — the seminar was conducted by four student leaders who, collectively, had taken nearly every AP test the school offers. They stood at the front of the darkened room, delivering a slide presentation and sharing their experiences with the underclassmen.

Marsha Martin will never forget the day she was released from a military correctional facility in 2011, after serving a 15-month sentence for theft. One thought kept running through her mind: “How do I start my life over?”

“It took me about six months to break down my pride and go to the system and say, ‘I need help,’ ” Martin, 41, said. The Alexandria resident went to OAR (Opportunities, Alternatives and Resources) of Fairfax County, one of a handful of nonprofit organizations in Northern Virginia that help offenders reenter society. She received assistance with her résumé there, and she eventually landed a job in veterans services.

Despite two promotions in her first year, she was forced to resign, she said, because her felony record kept her from obtaining accreditation through an affiliate organization. She eventually returned to OAR to seek further help.