When officials from the Belmont Country Club homeowners association realized that weeds were threatening trees in the neighborhood’s protected areas, they decided to bring in a herd of goats.

Last week, a truckload of about 30 goats arrived in the gated community to begin a five-day feast that association officials hoped would rid the areas of invasive nonnative vegetation. 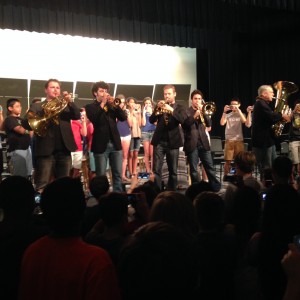 The Canadian Brass, widely acclaimed as one of the most popular brass ensembles in the world, visited John Champe High School in Aldie recently to conduct a workshop for Loudoun County band students.

About 700 students from 10 middle and high schools attended the May 29 workshop, where the ensemble demonstrated diverse musical styles, including early Renaissance music and a Peruvian tango.