With the help of some local high school students, Leesburg artist Kevin Dunn is adding a splash of color to one of the drab gray walls of Leesburg’s downtown parking garage.

Last weekend, several art students from Tuscarora and Heritage high schools joined Dunn in painting a bicycle-themed mural he designed to serve as a backdrop to some bike racks inside the garage. Dunn and other proponents of bringing art to public places hope the project will revive interest in creating a larger mural on an exterior wall of the garage.

During downtown Leesburg’s First Friday event this month, scores of people got a glimpse of a war being quietly waged every day in the Loudoun County Circuit Court archives: the battle against the ravages of time, including mold, bookworms, rust and acid-laden cellophane tape.

About 160 people stepped through the doors of Leesburg’s 122-year-old courthouse — away from the sounds of al fresco diners and street musicians — to learn how the county’s historic records are being preserved and restored.

“Toledo and his band are incredibly talented and, if there is any justice in the world, this will be the album that brings Car Seat Headrest to a much wider audience.”

“Many legendary songwriters took years to hone their craft (Bob Dylan, David Bowie, Stevie Wonder), but at the ripe age of 23, Toledo has skipped the pruning process and jumped right in with two high-energy, infectious albums in under 12 months, both featuring insight and maturity far exceeding his age.”

“Albums are rarely this ambitious or executed this brilliantly.”

“Toledo responds with the warmest, brightest batch of songs of his career, precocious still…but finally angling toward a renown all his own.”

“It is surging, fist-raising music, but its lyrical concerns are precise, introspective, and often near-political in criticizing how society treats the congenitally sad.”

“…behind the thick-rimmed glasses lies a monstrously gifted, prolific (10 albums at 23?) musician – who backs his mystique up with a visceral, energetic performance.”

“I think CSH are like my Bright Eyes to some of the young lads in the room, a band [that feels] like yours, when you learn all the lyrics and find meaning in them that you can relate to, and those types of bands are so important.”

“They may look like they’ve just stumbled out of a uni dorm into the big bad world for the first time, but watch out for these mis-matched, unassuming group of guys – they put on a core rattling performance and they’re gonna be huge.”

“Songs like Fill in the Blank, Destroyed By Hippie Powers and Something Soon weave from compulsive pop choruses to wail-along crescendos, dripping lyrics of wisdom and experience far beyond his Leonard Hofstadter demeanour.”

“The May 2016 release of Teens of Denial marked something of a coming-of-age and the billing of Car Seat Headrest on the [Glastonbury Festival] Park Stage seems like a marriage made in a lo-fi heaven.”

“…complete spiritual defeat has never sounded more thrilling than the way Toledo screams ‘I give up’ over conquer-the-world guitar swells that indie rock has thankfully started to remember how to do again.”

–Michael Tedder re: “The Ballad of the Costa Concordia” in Brooklyn Magazine, June 21, 2016

“Teens of Denial is symbolic of the next step in Car Seat Headrest’s journey: from a cult-internet phenomenon to world renowned rock sensations.”

“Toledo captures, with equal parts wit and poignancy, the freefall between losing your innocence and reclaiming your self-respect.”

“Car Seat Headrest is indie rock as it should be, full of acute and witty observation but also able to provide emotional release.”

“Like Courtney Barrett, he comes off as a rock-loving child of alt-rock’s skepticism, working backwards towards something to believe in.”

“‘Teens of Denial’ is the record of the year.”

“Critically acclaimed and touring a new album, CSH are perfect for anyone looking for the next big thing.”

“As soon as I saw ‘Drunk Drivers / Killer Whales’ on Car Seat Headrest’s NPR Tiny Desk Concert, I knew it’d be one of my favorites of 2016. Who knew they’d make 11 more just as captivating?”

“Teens of Denial” manages to be a little of everything; raw but polished, heavy but clear, fun but honest.”

“The momentous Teens Of Denial feels like a coming-out party for slacker music’s latest poet laureate.”

“It’s a chorus that will be stuck inside your head all summer.”

“Toledo’s songs are sharp and complex, self-loathing without being self-pitying.”

“It’s like skipping through an indie rocker’s iPod, but with bizarre clarity.”

“This is a really solid album from start to finish.”

“Car Seat Headrest’s newest record is what all good indie rock should aspire to be.”

“True to the legacy of the loquacious rock troubadours who came before him — Dylan, Young, Malkmus — Will Toledo draws inspiration from a youthful disregard for authority.”

“Teens of Denial…is totally the most badass piece of music released so far this year.”

“Will Toledo battles his angst and bear hugs the world. The result: a perfect underdog anthem.”

“I’m happy to predict that for years to come, we’ll still be talking about Beyoncé’s Lemonade and Car Seat Headrest’s Teens of Denial. Pick of the week.”

–Matthew Parsons on Overthink Anything, June 5, 2016

“The sprawl of the song, the multiple parts shifting and weaving into one another, represents something often amiss in indie rock – ambition. The pointed lyrics also get to the heart of what it feels like to transition from adolescence to adulthood.”

“The honesty here is ridiculously refreshing.”

“The continuation of Toledo’s lo-fi sound benefits the song, giving the character within a real bite, as well as being rough around the edges.”

“Toledo balance-beams between self indulgence and depressive confession beautifully, and brings it together to do one of the most difficult, yet human, things one can do: ask for help.”

“This album can make you feel 100 different ways. It took only a few listens for me to feel them all at once.”

“Last week at the Manhattan headquarters of Matador Records, employees chucked thousands of brand-new copies of an acclaimed album into a garbage truck, which crushed the CDs and vinyl records and carted them away.”

“Car Seat Headrest’s ‘Teens of Denial’ is Anthemic Indie Rock at Its Best.” 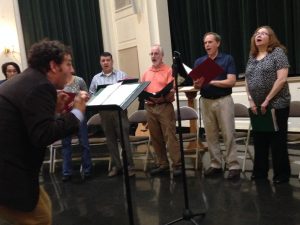 After Ron Sipes had a pair of strokes in October 2012, doctors predicted he would never walk or talk again.

But Sipes has defied the odds. On May 18, in a voice clear and strong, he sang out the opening lines of a song made popular by Louis Armstrong…